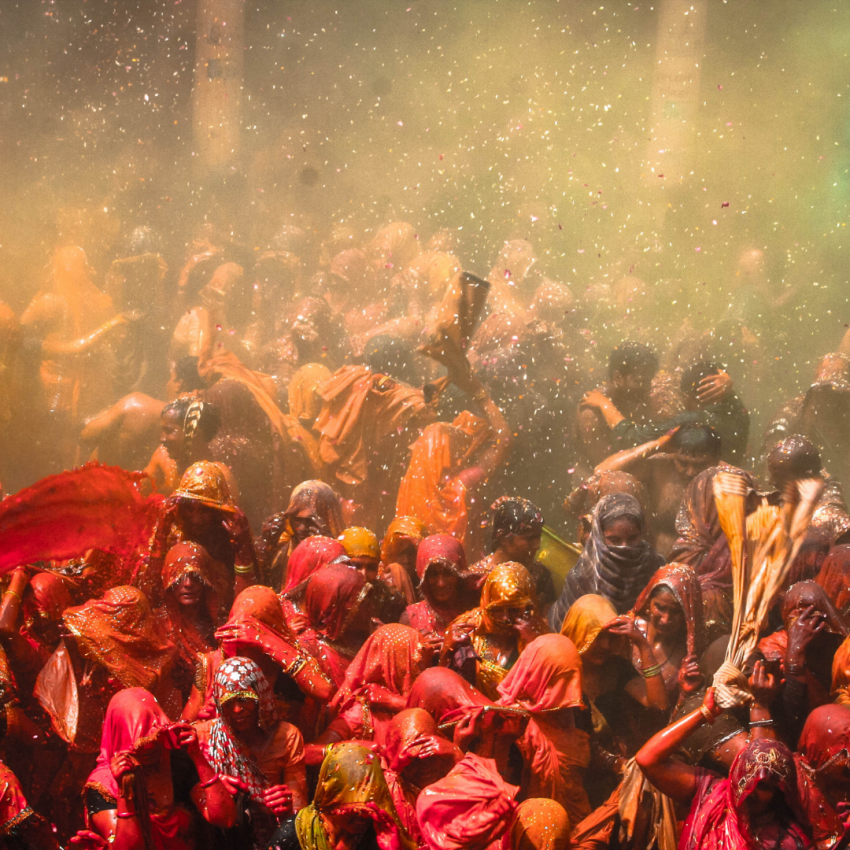 This year’s weather is very different than usual. In California, it already feels like spring due to warm weather. Let’s see how the people welcome the spring season all around the world.

The “Holi” is also known as the “festival of colors”. It is a Hindu festival celebrated in India and Nepal. There are different stories behind this festival. Spring celebration is different all around the world and India celebrates it with splashing colors.  The festival signifies the victory of good over evil. In some regions, it is also celebrated in memory of the divine love of Radha for Krishna. This festival is very famous among the north Indians. It doesn’t follow the English calendar, so it doesn’t have a fixed date. It follows the Hindu calendar and is celebrated on the next day of full moon day in Phagun month.

Mathura is popular for its Holi celebration.

How to reach there?

You can fly to any major airport like Delhi or Mumbai and go from there. India is well connected in terms of transportation, you can take a taxi, bus, or train to reach your destination.

You can find hotels, Airbnb, or hosting families for your stay. In Mathura you will find small hotels or lodges to stay. 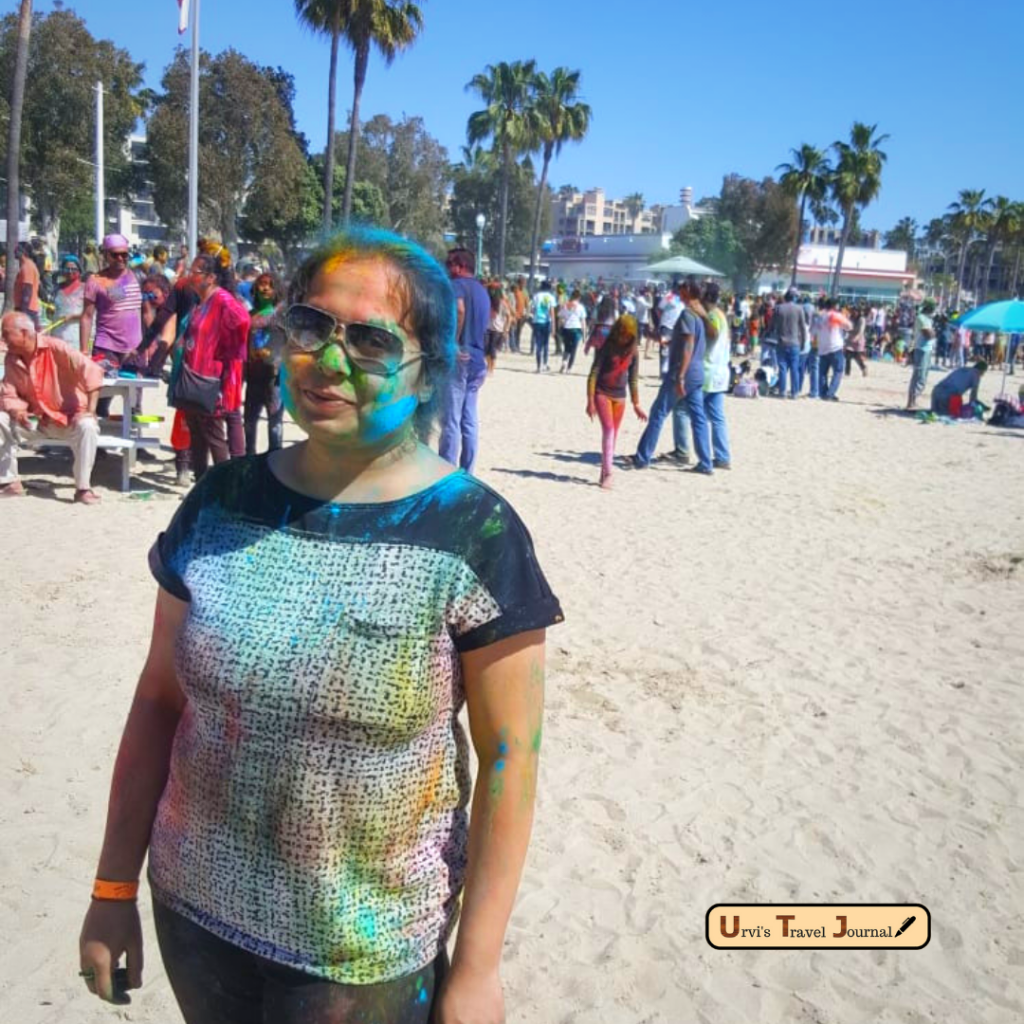 Recommended by Pafoua by her wanderful world

Songkran, also known as Thailand’s New Year, celebrates the Thai new year celebrated every April from the 12th-15th. This festival includes water splashing and throwing contests, symbolizing the washing away of bad luck and bestowing good luck for the many years to come.

How to reach there?

To get to Chiang Mai, you can fly directly into the Chiang Mai International airport, about two miles outside the city, then you can take a taxi or the town bus to your hotel.

During this time, Chiang Mai is best explored by bicycles or scooters because traffic gets heavy with Songkran celebrators. However, you might just be splashed yourself riding on a bike or scooter!

During Songkran, the weather in Thailand will be highs of 97°F and lows of 72°F, so you will want to pack a variety of clothing. It would be best to carry sunscreen because you will be outdoors for many hours celebrating Songkran. If you’re looking for an incredible and unique festival experience, look no further than Songkran in Thailand. 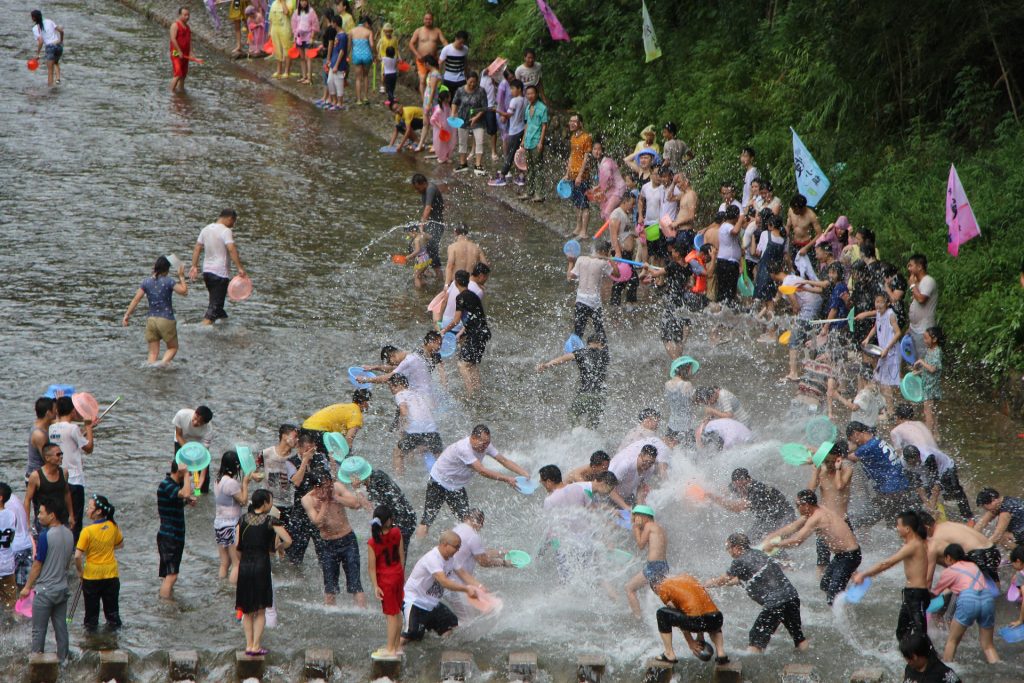 Recommended by Joanna of the world in my pocket

The Romanian tradition of Martisor has been celebrated for hundreds of years, and it is welcoming the coming of spring. Martisor is celebrated on the 1st of March, and it has its origins over 2000 years ago, before the Roman calendar was introduced when the country was called Dacia. Back then, the month of March was dedicated to the god Mars, the protector of unions between men and women. It was a time to celebrate when men would give women gifts. The women used to wear a coin tied up with a red and white string along their necks, to be healthy and loved for the entire year ahead.

Today, Martisor is a small feminine symbol representing a flower, a ladybug, a butterfly, even a horseshoe for good luck. It is always tied up with the red and white string, which represents the cold of the winter blending with the warmth of the spring. Usually, men offer the “Martisor” to women on the 1st of March. Women have to wear the “Martisor” on their chest, as a brooch, for nine days. After that, they must tie the string to a blossoming tree. It is said that the same way that tree will blossom, the same way the woman who tied the string to it will too. 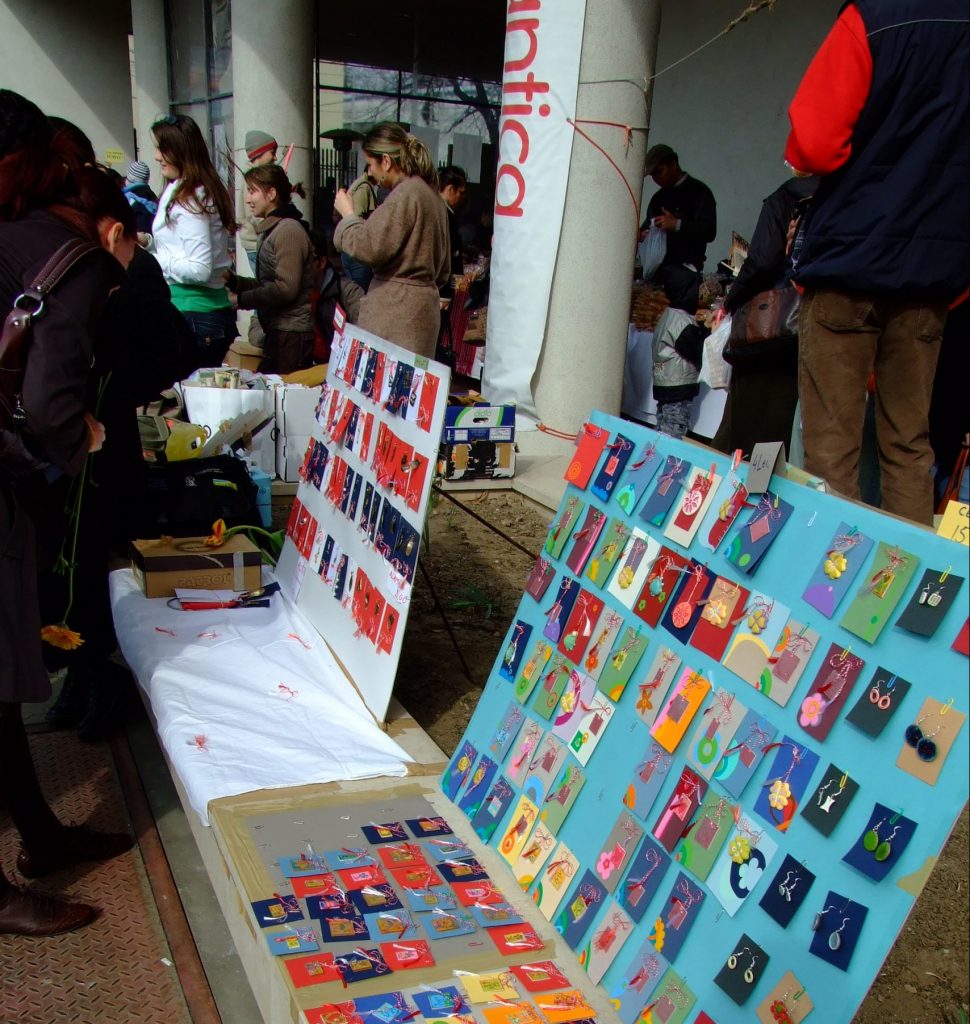 Vappu – May Day in Finland

Vappu is a Finnish Spring holiday celebrated since the 8th Century. But throughout the years, the celebration has evolved, and nowadays, it is known as a day of celebrating the End of Spring, Worker’s Day, and the Graduate’s Day. Everything mixed to the perfect carnival-like day!

Vappu is celebrated on the 1st of May, all over Finland. Wherever you are, you can celebrate it. But the best place to visit during Vappu is Helsinki. The capital is alive during this holiday. For the best experience, you should spend both Vappu Eve (the 30th of April) and Day (the 1st of May) in Helsinki as it’s celebrated on both days.

How to celebrate Vappu?

This festival/carnival day doesn’t have a main event or an event location. Yes, you should be in Helsinki during the holiday, but there won’t be only one place to be to celebrate, just like there isn’t only one way to celebrate.

On Vappu Eve at 6 pm, graduates can put on their white graduation caps. At this time, graduates also give the white cap to Manta, a statue in the center of Helsinki. After this event, many go partying. So if you like to party, find a bar/pub/park where graduates are partying, join them! On Vappu Day, graduates gather in parks for picnics, mostly Kaivopuisto (Finnish speaking graduates) and Kaisaniemen puisto (Swedish speaking graduates. This would also be an excellent opportunity to meet Finns.

If you are not one to party, you can take a stroll through the city to find all kinds of stalls. Balloons and serpentine are also a part of the celebration, and you can find many kids walking around with newly bought balloons. You might also see sugar and cinnamon-covered doughnut stalls as this is one of the main threats on Vappu. Also, a Finnish drink called Sima (the photo) is enjoyed. Many also dress up for Vappu. Usually kids, but if you like, feel free to dress up with a masquerade mask or a colorful outfit to join the party!

How to reach and where to stay?

As the best celebrations are in Helsinki, that is where you are to go! Take the bus/train from the airport to the city center (it takes about 40min) and you will be there! There are many hotels in Helsinki, but if you want to stay in the central city area, find a hotel in the Kamppi or Ullanlinna areas. 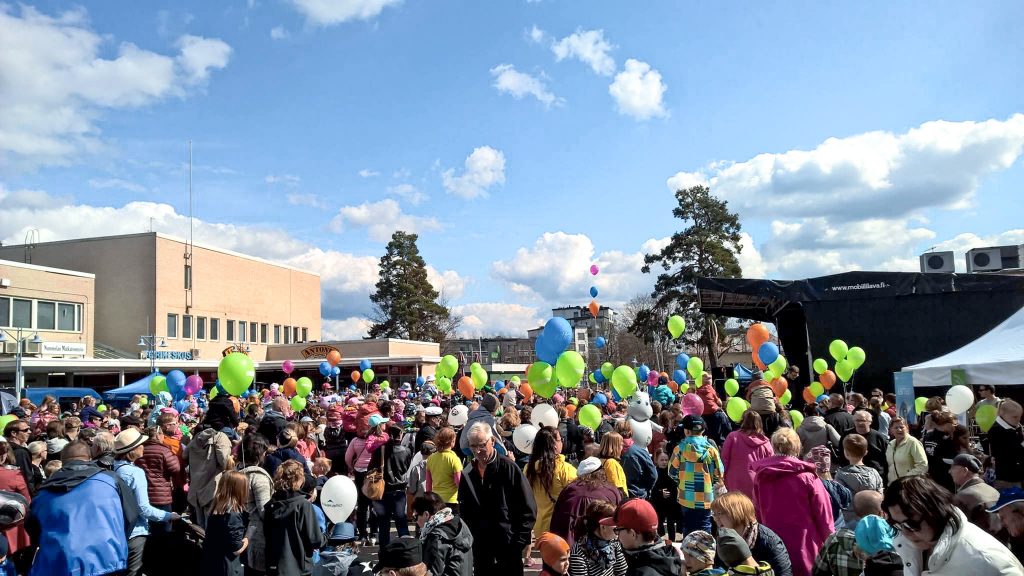 Recommended by Caroline from  veggiewayfarer

The Carnival of Binch is a unique celebration that happens each year in the town of Binch in southern Belgium. The festival occurs right before Ash Wednesday (Sunday, Monday & Tuesday). On the first day of the celebration, as per tradition, the whole town dresses up and takes to the streets, which are alight with street performers and festivities.

The starlets of the Carnival are the Gilles, men, and women clad in wax masques and colorful uniforms under which they wear wooden shoes. On Tuesday before Ash Wednesday, the Gilles come together and parade through the city with baskets of oranges, which bring good luck.

How to reach Binch

Getting to Binch is simple enough; simply hop on the train from Brussels Central, and 1h15 min later, you will be in the center of Binche. Should you have flown into Belgium from Charleroi, make your way to the central station and take the direct train to Binch. The train ride takes around 45 min.

Belgium gets pretty chilly in the winter, with temperatures hovering around 39°F and a strong chance of rain; you will want to pack sensible, warm, and waterproof clothing for this trip.

Where to stay in Binch

Binche is small, and it tends to get extremely crowded during the festivities. Your best bet is to stay in Brussels at the Cocoon Hotel. Trains to Brussels run until well after midnight, leaving you ample time to enjoy the Carnival before heading back to Brussels for a good night’s sleep. 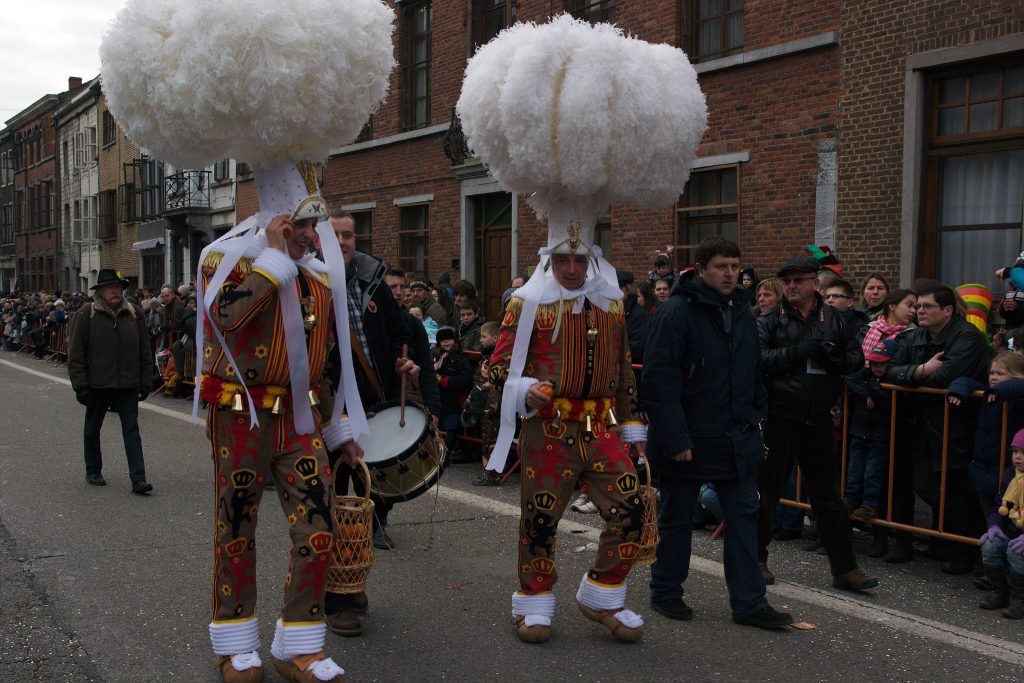 Which is your favorite spring celebration?